As a regular school author visitor, I've made over 2,000 school author visits and conducted whole-school Assembly Shows and individual Class Workshops for more than 400,000 children. Lots of schools do class work on my books either before or after the visit.

Using the 'Reading Room' from the 'My Story House' learning system, I encourage children to READ-TO-WRITE: advising them to read as many books as they can by as many authors as they can to help them plan and write their own stories.

One author I suggest children may like to discover is S. F. SAID (more below). An A-Z list of more suggested children's authors for children to discover is on my website: https://www.jacktrelawny.com/read-to-write.html 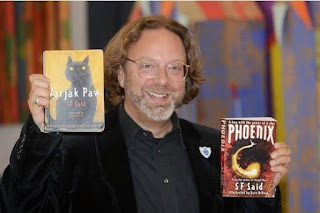 Said was born in Beirut in 1967 and spent his first years in Jordan. He grew up in the Iraqi community in London, moving there with his mother at the age of two. After graduating from the University of Cambridge, he worked as a press attaché and speech writer for the Crown Prince of Jordan’s office in London for six years. He began a Ph.D. in 1997 looking at the lives of young Muslims in Britain, but left academia to focus on film journalism for the Daily Telegraph – where he brought attention to much so-called world cinema, including contemporary Islamic cinema – and on writing for children.

His first novel was Varjak Paw, illustrated by Dave McKean and published by David Fickling Books in January 2003; four months later in the U.S. Said wrote 17 drafts of the book. It tells the story of a Mesopotamian Blue cat called Varjak who leaves his sheltered upbringing to explore the city and learn the "Seven Skills of the Way", taught to him in dreams by his ancestor Jalal. In his dreams, Varjak finds himself transported from his gritty urban surroundings to the deserts, rivers and mountains of Mesopotamia (ancient Iraq). With the Skills, he is able to fight the Gentleman and, in The Outlaw Varjak Paw (2005), the domineering "white cat with one eye", Sally Bones, who is invading the territories of other cats and ruling them with torture and terror. Varjak Paw won the 2003 Nestlé Smarties Book Prize, reader ages 6–8 years, and The Outlaw Varjak Paw won the 2007 Blue Peter Book of the Year. Varjak was staged as a play by Playbox Theatre, and was performed as an opera by The Opera Group in 2008.

Phoenix (2013) is a longer novel written for older children. The Internet Speculative Fiction Database calls it young-adult science fiction rather than (animal) fantasy. It made the shortlist of four books for the 2014 Guardian Children's Fiction Prize, whose judges recommended it for ages 10 and up, and whose coverage by The Guardian called it a "space epic". 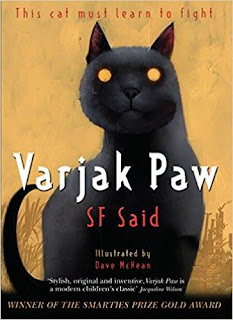 VARJAK PAW: https://amzn.to/2yzM36p
Varjak Paw is a Mesopotamian Blue kitten. He lives high up in an old house on a hill. He's never left home, but then his grandfather tells him about the Way - a secret martial art for cats. Now Varjak must use the Way to survive in a city full of dangerous dogs, cat gangs and, strangest of all, the mysterious Vanishings. 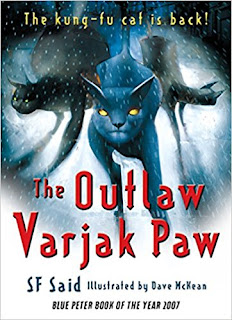 THE OUTLAW VARJAK PAW: https://amzn.to/2KduBJH
Having saved the city cats from a fate worse than death, Varjak Paw finds himself the elected and popular leader of a new gang - a gang that supports freedom and kindness for all. But will the pressure take its toll on this brave yet sometimes naive cat? Soon the city erupts in an all-out gang war as the evil Sally Bones attempts to control the lives of all cats. Horrified and outnumbered, Varjak and the others must fight for their freedom or die trying; can Jalal's Way really be the best way? This is another thrilling adventure, eagerly awaited by all Varjak fans, both young and old. 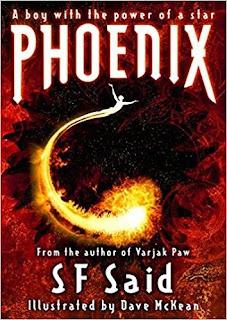 PHOENIX: https://amzn.to/2K23n9y
A boy with the power of a star... Lucky thinks he's an ordinary Human boy. But one night, he dreams that the stars are singing to him, and wakes to find an uncontrollable power rising inside him. Now he's on the run, racing through space, searching for answers. In a galaxy at war, where Humans and Aliens are deadly enemies, the only people who can help him are an Alien starship crew – and an Alien warrior girl, with neon needles in her hair... 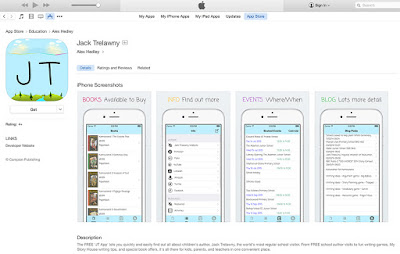 The FREE 'JT App' lets you quickly and easily find out all about children's author, Jack Trelawny, the world's most regular school visitor. 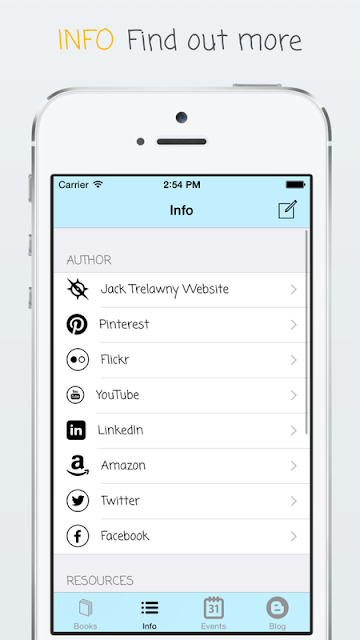 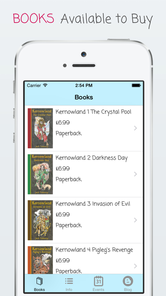 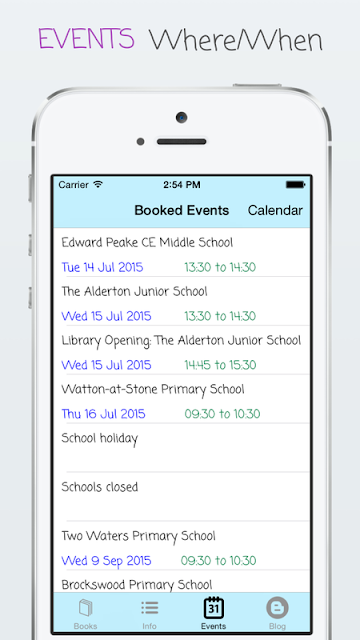 it's all there for kids, parents, and teachers in one convenient place. 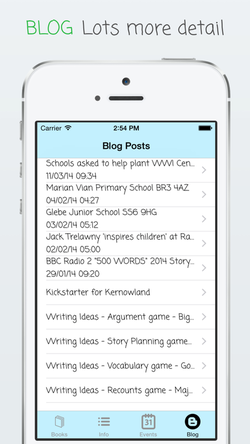 Jack Trelawny school and family Resources can be found here:

NEW TITLE: The Emperor's Rhinoceros - The Amazing Adventures of Ganda the Brave 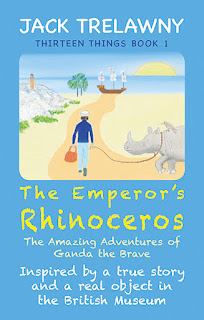 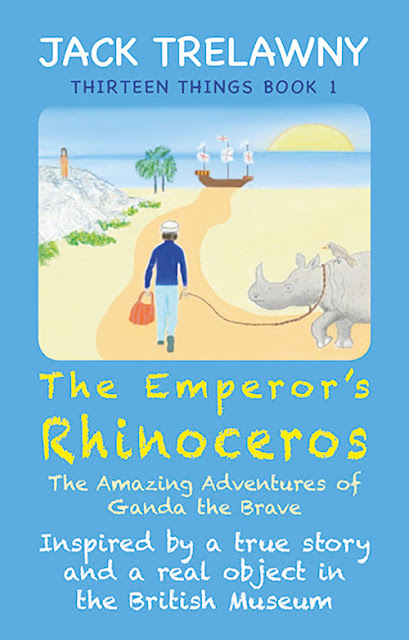 THE FIRST TITLE IN THE NEW THIRTEEN THINGS SERIES


The Emperor's Rhinoceros
The Amazing Adventures of Ganda the Brave

Ganda is a happy young rhinoceros living on the Plains of India. One day, he and his mother visit the watering hole. Ferocious hunters attack. Stolen and chained, Ganda begins an incredible journey: from Asia to Africa to Europe. Can the heroes - Ganda, Akeem the apprentice zookeeper, Princess Aisha of Gujarat, and Tikki the clever tickbird - foil the plans of Raja Kadar, the tyrant of Rajasthan?

This is the first book in Jack Trelawny's 'Thirteen Things' series... 13 stories inspired by the joint British Museum and BBC Project: 'A History of the World in 100 Objects'. Jack is visiting hundreds of schools to show children how he turns the true stories of the real objects into fiction.


Buy Signed Books with a Dedication to Child(ren) 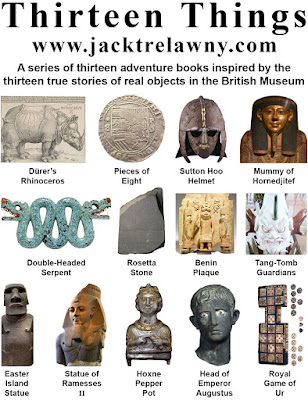 School and family Resources for this book can be found here:
www.jacktrelawny.com/thirteen-things 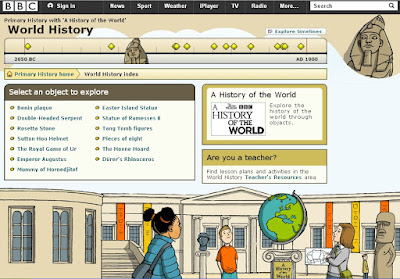 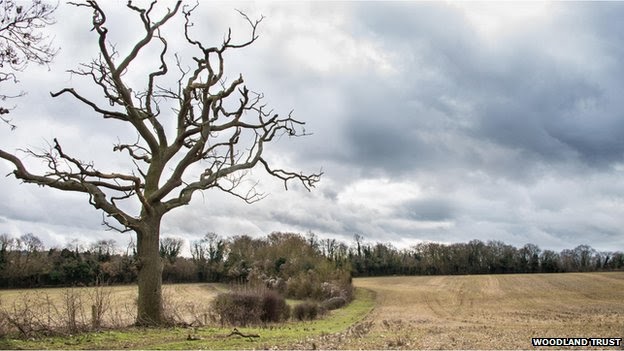 
Today, the Woodland Trust launches its First World War Centenary Woods project which will see millions of trees planted across the UK and four flagship woods created – in England, Scotland, Wales and Northern Ireland – to commemorate the Centenary of the First World War. 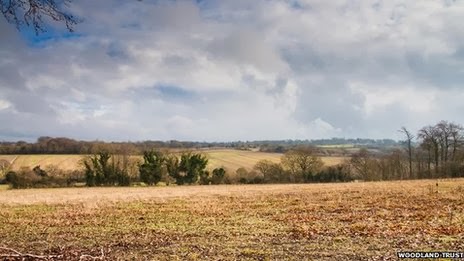 Some of the trees that will be planted at the new woodland in Epsom,
Surrey, include alder, beech, blackthorn, wild cherry and crab apple

The "centenary woods" will be formed by volunteers planting trees and plants.

Volunteers can find out about their ancestors who took part in the war and dedicate trees in memory.

The woods are expected to span more than 1,000 acres collectively.

Three million free trees will also be available to schools and community groups to plant, the charity said.

The trust said the trees would "transform the landscape into rich, vibrant and flourishing woodland", and prove to be a fitting legacy for those who lost their lives in the 1914-1918 war. 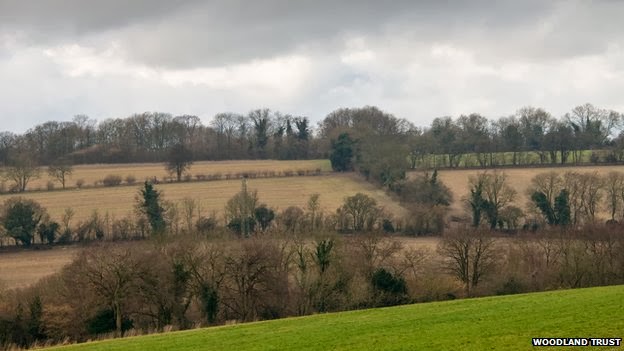 The first trees will be planted this autumn,
and the project is set to continue until autumn 2018

Sites in Wales, Scotland and Northern Ireland are yet to be chosen for the woodlands, while for England a 640-acre site near Epsom, Surrey, has already been earmarked.

The site at Langley Vale will be bigger than the Olympic Park and have space to include 200,000 trees, and it will link up pockets of existing woodland. 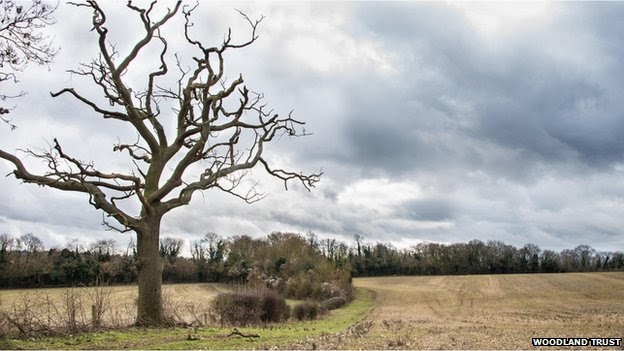 Woodland Trust project director Karl Mitchell said: "The trees planted during the course of this £12 million project will stand for hundreds of years, providing a lasting tribute to all those involved in the First World War.

"We hope to see many thousands of people getting involved by planting their own tribute or dedicating trees in memory of loved ones.

"As well as representing enormous strength and bravery shown by the nation during World War One, the trees that are planted during the course of the project will help strengthen our natural landscape, increasing its resilience to the threats posed by pests and diseases." 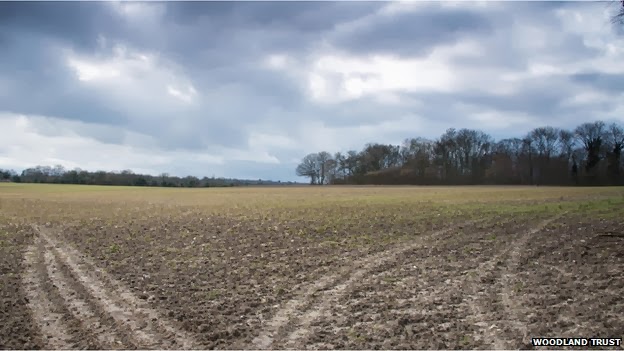 Around 200,000 trees will be planted at Langley Vale, in Epsom, Surrey

The first trees will be planted this autumn, and the project is set to continue until autumn 2018.

Schools and community or youth groups will be able to apply for a share of the three million trees, which can be planted anywhere the individual school or group chooses.

For more Jack Trelawny ideas, resources, books, ebooks, audiobooks,
free school visits, and 'My Story House' workshops, go to
www.jacktrelawny.com and jacktrelawnyamazon.
Posted by Jack Trelawny at 9:34 am No comments: 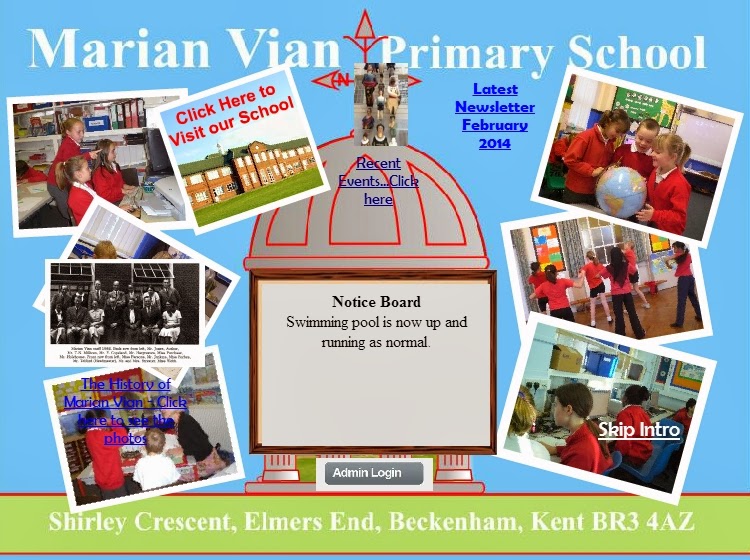 After presenting my reading and writing show, I signed 326 Kernowland series books for the children.

This is a record number of books signed during a school author visit! 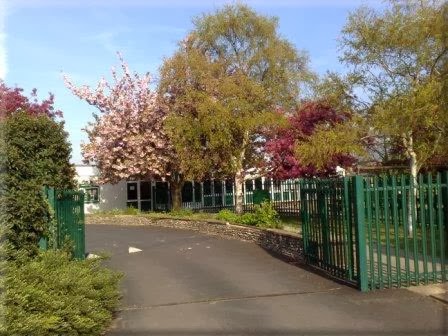 Great answers to the questions. 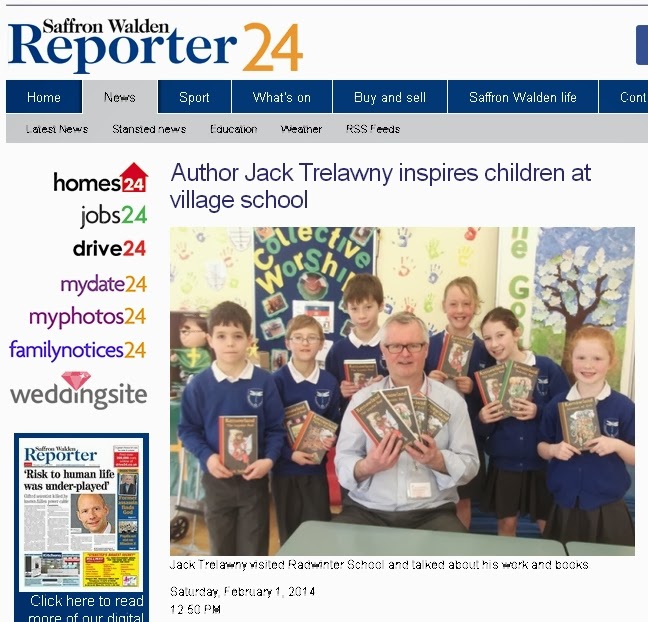 Jack Trelawny, author of the Kernowland series of books, visited the school and talked about his work and books, and what inspired them with ideas for creating imaginary characters and settings.

Year 6 pupil Lauren Porthouse said: “The talk was truly inspirational and will definitely help with our story writing.”

Class 4 teacher Mrs Powell added “The children were enthralled by his talk. His mythical characters certainly captured their imagination.

“Many of the children bought signed copies of his books and were looking forward to reading them to find out more about the magical land of Kernowland.” 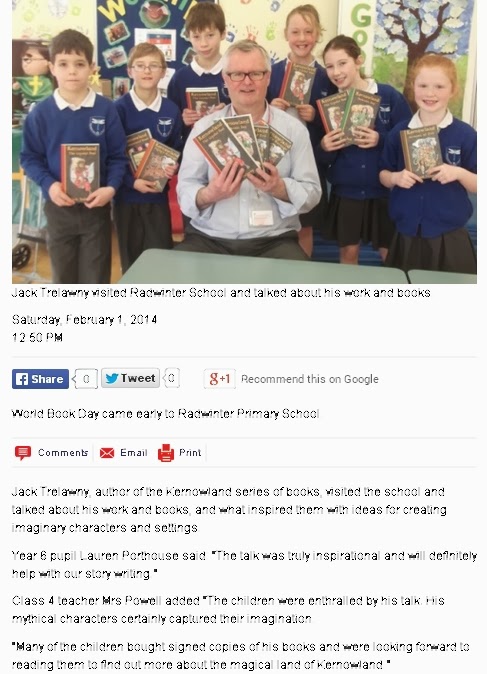 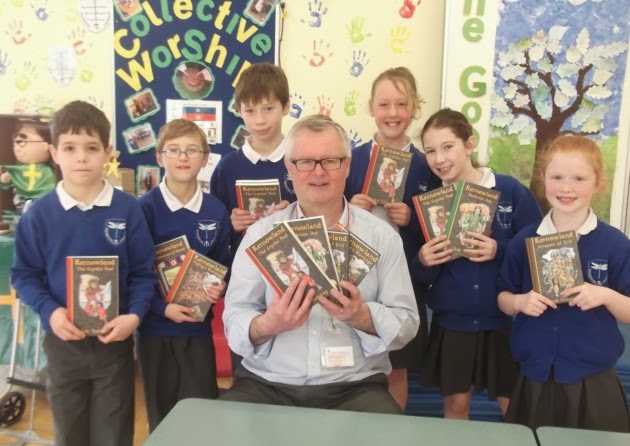